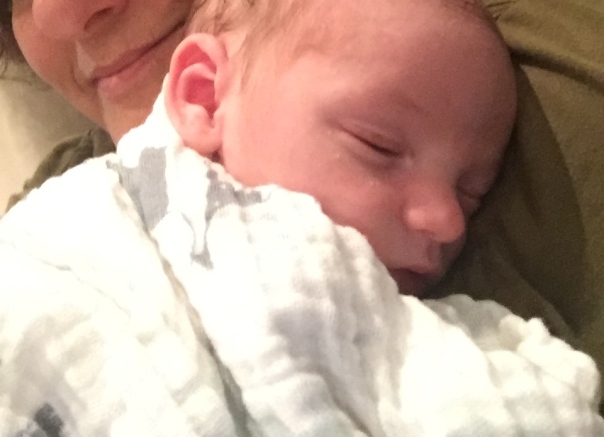 It has been over six weeks since I last posted, a long stretch given I usually post at least once a week. I have spent most of that time, ever since BabyRalph’s birth, in New Orleans helping my daughter and her growing family. Basically, I have been embroiled in Grandbaby Land, pretty much to the exclusion of everything else in my life.

I write those two words nervously aware that you may be judging me as a bad wife for leaving Ralph in the breach. Or maybe I am projecting my own nervous guilt? A little of both I suppose.

But the funny thing is that Ralph is thriving in my absence.

I didn’t make the decision to be in New Orleans  lightly but I can’t say I hesitated. There were some rocky health moments in the first couple of weeks of BabyRalph’s life, and while he is fine now, he has demanded a little extra care. My daughter asked me to be there as much as possible to help. Ralph and I discussed it, and he was surprisingly comfortable, even encouraging, at least in the abstract. So after our initial visit, I drove him home to the farm and spent a few days organizing his life to work without me for the next ten days before driving out the driveway without him.

I called in favors from friends to set up a schedule of visits so that someone would be dropping by literally every day, whether to take him out to dinner or to chat for a few minutes and make sure he was okay. I set up his pillboxes. I bought and cooked frozen pizza, a roast chicken, and other favorite prepared foods.

Most important I made a new form of checklist for him: a linear calendar with times and activities spelled out in detail and a space for him to check X once he completed a given activity. Every day he was to X when he took his pills, when he fed the dogs, when he ate lunch, when he ate dinner (with menu suggestions spelled out), when Francis or Debbie or Kay etc. visited.

Ralph has always loved lists and calendars. When he ran his business, he swore by his calendar keeping and had all his employees keep detailed calendars as well. Now that his sense of time is shot—he can read a clock but has no sense of days, dates or the passage of time hourly or daily—we keep both a calendar book and an eraser board calendar for reference. (He does not use a computer or smart phone.) But this new checklist, which I taped to the kitchen counter, has been a revelation. He loves it and takes pride in checking off. The irony is that the only time he has missed taking his pills in the last two months was a Saturday when I was at home with him so didn’t have the check off list in action.

As for my presence, basically I have been gone for a week to ten days at a time, then home for two to four days, then gone again. While I am in New Orleans, I call Ralph in the morning to make sure he gets up, then every three hours or so throughout the day. And of course he calls me occasionally, although not as often as you’d think, usually when something has sparked him into a loop and he wants to discuss it over and over on the phone, just as he would if we were together at home.

But really he doesn’t seem very needy because he is suddenly Mr. Social, enjoying the company of my woman friends, “the Girls” or “my girlfriends” as he calls them, who sit with him during his late afternoons on the porch and sometimes drag him out to dinner. The woman who has cleaned my house for twenty years comes by twice a week (refusing to take money for the extra visits so we have arranged a barter) to make sure he has everything he needs. Everyone who comes, knows to check the pill box just in case and to make sure there are never more than a few beers in the fridge as well as where to hide the extras.

More important, so far everyone has let me know that Ralph seems to be not only holding his own, but in great spirits. Of course I worry, am I being selfish.

As a wife I should want to be with Ralph more than with anyone else. But the truth, and it is not easy to face or state, is that I can’t say I have missed Ralph as much as I think I should (of those shoulds!). This time with BabyRalph and family—filled with three-hours-of-sleep nights, endless laundry and washing of baby bottles and pumping implements, constant carpooling of a social butterfly thirteen-year-old adapting to having a tiny half-brother, and all the extenuating tensions of a life-changing event—has been a kind of vacation from my usual responsibility. I know Ralph may be less able to handle my absence going forward so I am taking advantage of the opportunity.

But I find myself wondering more and more how I am going to give up spending so much time with BabyRalph and how I can finagle Ralph into spending more time down here too. This is the crux of so much. As a married couple, the decisions of where to live and how to spend out time should be joint decisions. But I know we cannot live indefinitely the way we do now, on a farm that leaves us somewhat isolated and that Ralph can no longer keep up on his own. BabyRalph’s birth has thrown a spotlight on the need to make a decision sooner than later, but also on how complicated and difficult that decision and the ensuing changes will be…

7 thoughts on “From Memoryland to Babyland Part 2”

mciwife@gmail.com
Follow Alice in Memoryland on WordPress.com
Join 260 other subscribers