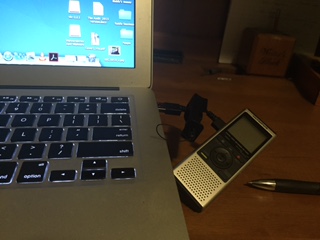 Many of you will be glad to know I followed your advice and have begun recording Ralph’s stories.

My saga of good intentions gone awry began a few days after my last posting–and the many comments encouraging me to get those stories down–when I brought up to Ralph the possibility of collecting his stories. He was not exactly excited.

That last seemed to get to him. So I wrote down a list of ideas and we talked a little about each until his memories of his youth started tiptoeing back.

The plan was that I record Ralph on a digital recorder—the kids would not want cassettes from the apparently obsolete machine I have used for years—and then transfer the stories to flash drives for the kids. My local Apple guy told me to go to Radio Shack for the best choices and assured me that all I needed to do was make sure the digital recorder was “Mac compatible”. That sounded easy.

I bought the recorder that clearly said “Mac compatible” and the guy at Radio Shack spent half an hour teaching me how to use it.

That afternoon, Ralph and I sat on the porch for our first story. The hog killing. He complained he could barely remember, but once he got started, there was no stopping him. One remembered detail sent him toward another. The result was a great story.

He immediately launched into a second story about his Aunt Della, including generations of family lore.

Then I tried to transfer the stories to my computer and save them. The directions, at least the ones in English, were vague at best. I was able to plug the recorder into the computer and a file would show up, but nothing would save. I am not the world’s greatest techy, but I sensed something was seriously wrong above and beyond my ineptitude.

Although Ralph was raring to go with more stories, I was afraid to continue.

I returned to Radio Shack the next morning. My still helpful clerk Corey couldn’t get the computer to save the recorded file. He suggested I go to the Apple guy. The Apple guy was also willing to help. After much fiddling and frustration, as closing time approached he graciously installed some kind of music program he was semi-confident would take care of things. If not, I was to come back in two days, after his day off, and he’d figure things out.

I went back. Apple guy called Apple. He then apologized. Being “Mac compatible” is evidently not adequate after all. I went back to Radio Shack. Although I had obviously used the recorder, Corey gallantly exchanged it for “MP-3 compatible.” Then he spent another half an hour teaching me how to transfer from recorder to computer.

I came home and told Ralph we’d need to re-record his the stories he’d already told because they were lost.

But it was already time for dinner and then bedtime. The next day I was tied up, then yesterday he had his art class. So here we are three days later.

Ralph is ready to start recording. He likes the idea of giving the flash drive presents. “It’s great we’re doing this.”

It will be. The problem is that now I’m not sure I remember how.

4 thoughts on “Keeping the Stories Alive Part 2: My Infamous Adventures in Recording”